Shipwrecks and tree ring evidence: fewer hurricanes when the sun was less active 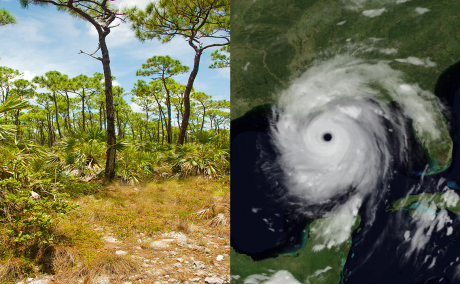 Carribean hurricanes can cause vast damage and loss of life, so there is great practical value in knowing how they will respond to global warming in the future. Meteorologists understand something of how hurricanes form and develop, but need more information about how they have behaved in the past; however the direct records are fragmentary and less than 120 years long. Now Valerie Trouet of the LTRR and her colleagues Grant Harley (University of Southern Mississippi) and Marta Domínguez-Delmás (University of Santiago de Compostela, Spain) have published a paper in Proceedings of the National Academy of Sciences, “Shipwreck rates reveal Caribbean tropical cyclone response to past radiative forcing” (http://www.pnas.org/content/early/2016/03/02/1519566113) that pushes the record of past hurricane activity back 500 years. The starting point were the records of past shipwrecks: at times when destructive hurricanes were relatively more common, more ships would be wrecked, and there are several centuries of records of ship losses. Although the shipwrecks painted a broad picture of hurricanes in past centuries, this reconstruction did not cover the recent period where there were direct records of the hurricanes themselves. However a tree-ring chronology from Big Pine Key at the south of Florida tied the two records together. Located where the tracks of many hurricanes would pass close by, these trees form narrow rings in the years where high winds whip away their foliage, or storm surges of seawater reach their roots. Unusually narrow rings matched both the times when shipwrecks were frequent, and when hurricanes were recorded directly. Looking over the multiple centuries of reconstructed hurricanes, the researchers found that they were uncommon during a period of several decades when the sun was known to be less active, known as the Maunder minimum.

The collaboration originated in 2013, when Trouet had been one of the main organizers of the Second American Dendrochonology Conference in Tucson, and was socializing with Domínguez-Delmás (a leading European authority on shipwrecks and tree rings) and Hawley (who was working on the tree rings from the Florida Keys) at a lull in the formal program. Domínguez-Delmás recieved one of the LTRR's Haury fellowships to support her visit to Tucson.